The C-panty is a one of kind c section or surgical recovery underwear that combines light compression with a silicone panel to aid in scar healing. While many recovery garments are designed with abdominal compression to aid in the healing of damaged and stretched abdominal muscles, the High Waist C-panty goes a step further by including the addition of silicone. While the C-panty was designed specifically for post caesarean mum’s, it can also be used for post hysterectomy recovery. If you would like the benefits of the silicone, without the abdominal compression, then opt for the Classic Waist C-panty. So what makes silicone beneficial for scar recovery? 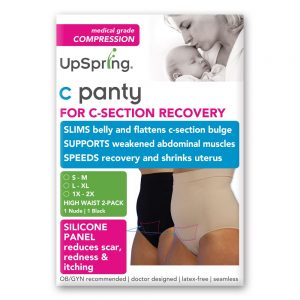 Scarring is a natural bi-product in the healing process after having an injury. However, since they are disfiguring, scars can be emotionally devastating to many people. This has led to many people fearing even surgical procedures that are considered necessary. Fortunately, there are treatments that have been proven to reduce the appearance of scars. One of the most popular and best non-surgical methods is the use of silicone for scar healing. Silicone scar treatment is non-invasive and has had great results under clinical observation. It works by reducing the appearance of scars through smoothing irregularities in the texture of the scar, as well as reducing any discolouration on the skin.

Silicone contains antioxidants and healing ingredients that significantly reduce the appearance of scars. We have known that wounds generally heal better in a moist environment. Silicone increases the hydration of stratum corneum (the outermost layer of the skin) thus assisting the regulation of fibroblast production and reducing the production of collagen. This results in a softer and flatter scar. The silicone also produces a static electric field due to friction, creating an osmotic barrier, further preventing loss of water. This also contributes to a softer and much flatter scar that is significantly reduced in appearance. Compared to other treatments, the use of silicone sheets or ointment has several benefits.

The benefits of silicone gel and silicone scar sheets:

As long as it is used consistently, the use of silicone for scar healing is highly effective in reducing the visibility and volume of scars. Now knowing the benefits of using silicone to aid scar healing, we can see why the Cpanty has become such a popular post Caesarean and post surgical recovery underwear.